We will speak on the various robot choices available and how each additional axis will unlock new abilities for the production line. As noted above, the increase of axes will often result in an increase to cost. However, it is often found that the cost increase still will often remain cheaper than employing individuals on the assembly line. Additionally, robots often can have a higher rate of completion as well as a perform at a higher level of repeatability and quality. There are 7 basic axes that robots operate on. Although one could theoretically increase that to 9, the need for more than 7 will often interfere with the production line or anything the robot is to be working on.

Robotic 'Axis' or 'Degrees of Freedom' describe the potential directions of movement of a robot component. Robots are typically designed to move either linearly in an X, Y or even Z direction or to have a rotational degree of freedom. So a robot that can rotate about a vertical axis has one degree of freedom. The same robot that has an arm that can swivel like an elbow has an additional degree of freedom. An end effector that can rotate adds another and mounting a robot on a table that can shuttle the robot back and forth, this is sometimes called a robot slide, transfer robot, robot transfer unit, linear transfer system or linear transfer unit adds yet another. Stacking degrees of freedom creates additional possibilities for automation.

'Cartesian Robots' are not what we typically think of as 'robot arms' or 'robots'. Cartesian robots are automated systems that move robotic end effectors along linear tracks. By stacking linear movement one atop another you can create automation solutions that are a bit less costly than a fully functional robot, but that in turn has less flexibility moving forward as needs change.

Below is an example of a 'cartesian robot', (courtesy Machine Design Magazine). 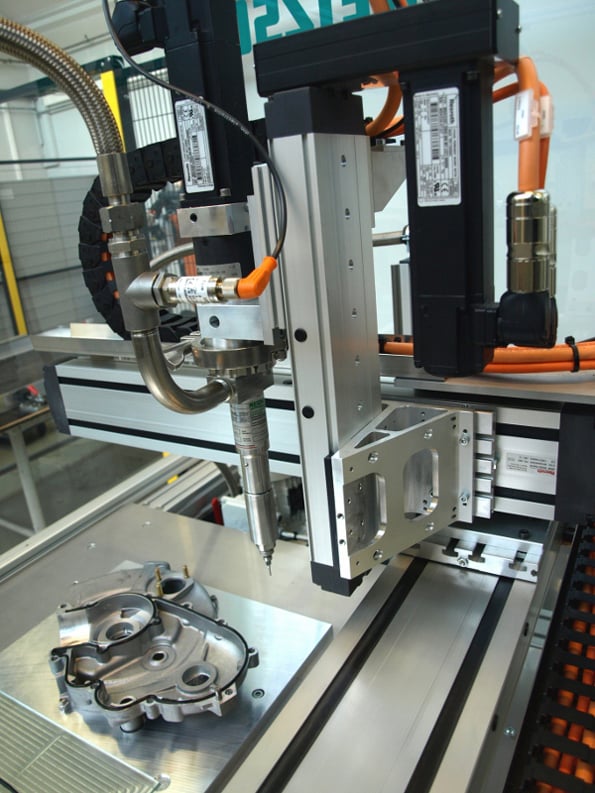 Below are some possible automation degrees of
freedom for an automation solution or robot:

One Axis Automation or Single Degree of Freedom - The device moves in one straight line on a track.

One Axis Robots (X-Direction) are used for simple motions on a simple assembly line. This movement can be valuable for simplistic functions such as shuttling parts on a conveyor or dropping bottles into a holder on an assembly line. Another example would be having a system that requires repetitive exact cutting in one direction, attaching a blade to a one dimensional automated device will allow for repeated identical cuts adjustable by the rate of the conveyer and the automated arm.

Two Axis Automation or Two Degrees of Freedom - An example of two degrees of freedom automation is an automated stationary drill press that machines parts as they move along a line below it. The vertical movement is one axis and the rotation of the drill bit is the second.

Two Axis Robots (X and Y-Direction) are used for simple tasks that require motion of parts from one location to another along the same plane. The extra degree of freedom allows for setup that would be unattainable with the one axis but not warranting a three axis. Two axis automation could be a device that moves in a typically vertical and horizontal axis, which could be two horizontal tracks in different directions. The most modern e-commerce facilities utilize floors of robots that move in a matrix across 2 axis.

Three Axis Automation or Three Degrees of Freedom - Three degrees of freedom automation could be a system that can move in an X and Y direction over a part and that picks inserts from a rack using vacuum instead of an end effector with grips and drops the inserts into holes in a part, perhaps a casting or injection molded plastic. Examples of a three axis robot can include a gantry robotic system, with overhead motion in a plane with an extendable downward arm to allow for some type of operation such as painting that doesn't add an additional degree of freedom.

Four Axis Automation or Four Degrees of Freedom - Four degrees of freedom automation could be the same set up as the three axis but allows rotation of the tool point of the robot arm. Fourth Axis Robots are much more common than three axis robots, as it allows for the tool to rotate, this rotation opens up applications that require something such as twisting or changing the alignment of the load.

Five Axis Automation or Five Degrees of Freedom - There are multiple ways that 5 degrees of freedom could be utilized in an automation instance. For instance, a 5 degree of freedom robot arm begins to look like what we typically think of as a 'robot'. The robot below, could be placed alongside a moving conveyer and perform simple operations on parts as they move by.

An Example of a 5 Degrees of Freedom Robot

Six Axis Automation or Six Degrees of Freedom - Six Axis Automation is what we typically think of as a 'robot'. This is a fully articulated robot arm on a base that can turn 360 degrees. Six Axis Robot (X, Y, Z and 3 Rotation Directions) are the primary and most commonly used robots. Six axis of freedom allows the robot universal freedom to operate its workspace independently. It has the ability to manipulate parts as desired to complete its task.

Seven Axis Automation or Seven Degrees of Freedom -Placing a six axis robot onto a linear transfer unit to allow shuttling the robot arm accurately between work zones creates a '7th Axis Robot'. Adding a seventh axis to a standard robot arm creates innumerable opportunities for production increases and higher efficiencies at lower cost for your automation system. The additional track increases the workspace of any individual robot. If you have a robot that is not operating at capacity and have a lack elsewhere, this additional axis could save you the need to have two inefficiently utilized robots. 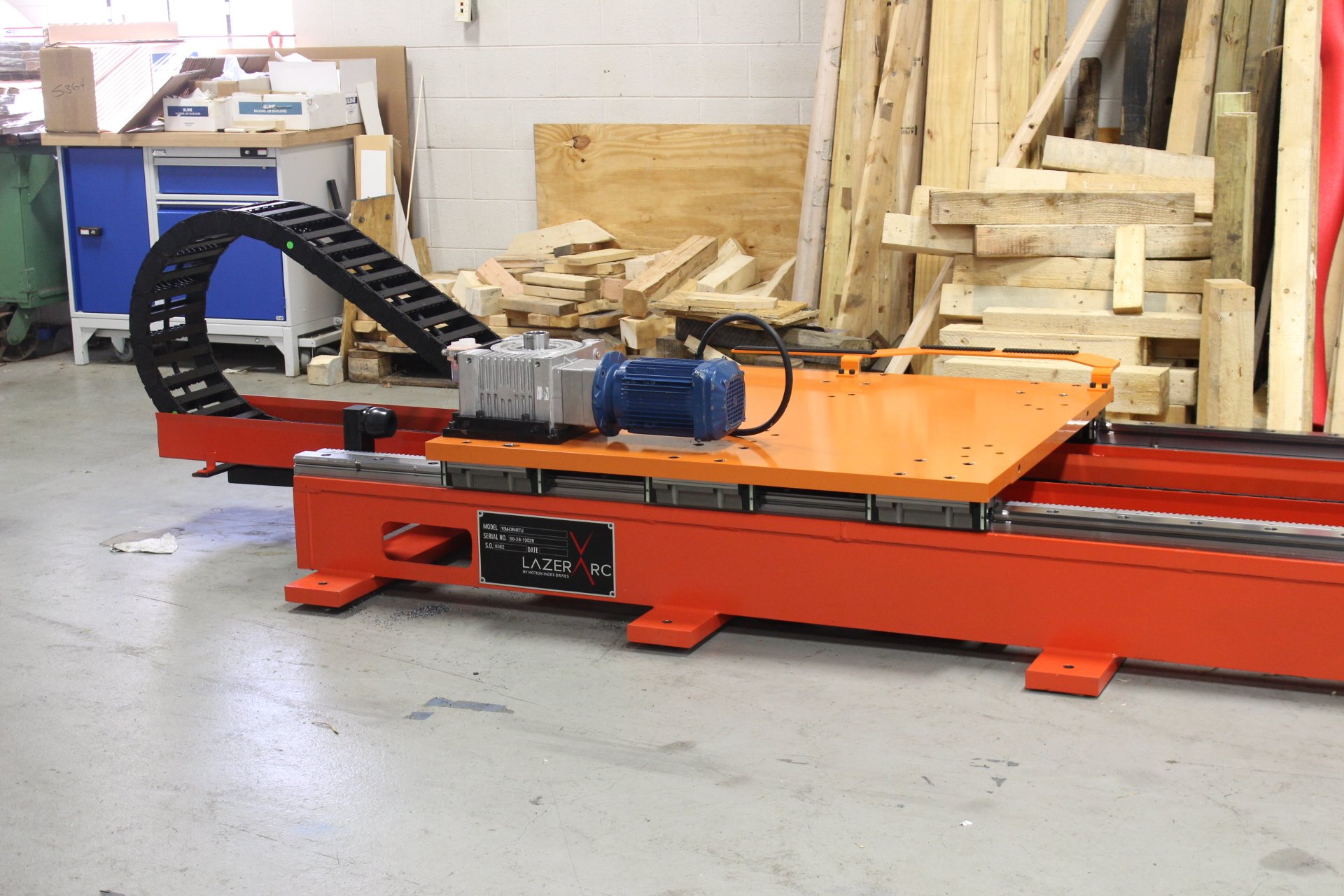 Greater Than Seven: This would be having a robot that could transverse forward and backward, left and right, and up and down. The size of this system would likely take up the entire floor space by the track in which the robot would use to travel. This space will typically be required for the assembly line and what the robot itself is working on. As a result of the spatial requirements logistically robots are often limited to Seven axes.

What Robot is right for you?

Robots on the axes range from 1-5 are deemed Cartesian robots, which allow for great spatial precision, speed, and are typically of lower costs. 6-Axis robots, such as SCARA robots are often larger, have a greater workspace, and allow for a greater variety of delegated tasks. When looking to create an automated system one robot may not be enough to complete what you need. What is often seen is having something such as a two axis robot that has the ability to deliver parts to a robot that is used for assembly, such as a SCARA robot mounted on a seventh axis, is required to allow for a complete process.

The optimal way to design your system is to look at the exact requirements of the production line. If you need an ability to feed a robot, and the robot being fed needs to be able to travel in three dimensions and align parts. It is likely optimal that a one or two axis transverse robot would be optimal to deliver the parts and have a six or seven axis robot at the end of that line to use delivered parts.