What are Gantry Robots?

A Gantry Robot is a subsidiary of a Cartesian or linear robot, also known as an RTU or robot transfer unit. So the first question ought to be what is a Cartesian robot? It is how it sounds, much like a cartesian coordinate system. It is a robot that is able to move in three dimensions, x,y,z. X being the floor in one direction, Y being the floor in the other, and Z elevating up into the room. This type of robot is met with limitations in its loading as it is essentially three cantilever beams stacked on one another. This issue can be resolved by the implementation of Gantry Robots. In other words, to cover a very large distance with movement with a Cartesian robot, you’d need very long arms and the cantilever loads. Even with small items being moved, it can become significant requiring massive robot arms and drive mechanisms.

A simpler, more reliable and far more cost-effective approach to covering large distances is to allow the Cartesian robot to be moved precisely in at least one axis as an entire unit. Linear Transfer Units enable this to happen. Additionally, elevating a robot on a linear transfer unit enables it to cover even more service volume. An elevated unit on a linear transfer shuttle is often called a Gantry Robot.

In this way, a smaller, more affordable robot can cover more applications.

What are applications of Gantry Robots?

Gantry Robot applications are extensive due to their versatile design, load bearing capabilities, and ease of programming. Eliminating the cantilever portion of a Cartesian robot the options for use increase dramatically with the load it can bear. This means that a well-positioned smaller robot can handle and move much more weight across larger distances.

Applications pertain to a wide array of uses on the manufacturing line, from component placement to welding, or assembly. The attributes for manufacturing use on the assembly line come from its repeatability, as the Robot is set in a coordinate system it knows exactly where to go to a great degree of accuracy. How well it is calibrated is the limiting factor.

Gantry Robots at about waist height are ideal for shuttling tools between machining centers as they can reach directly into a door designed for an operator. Overhead gantry robots maximize floor space and facilitate more volume efficiency, which means faster cycle times. 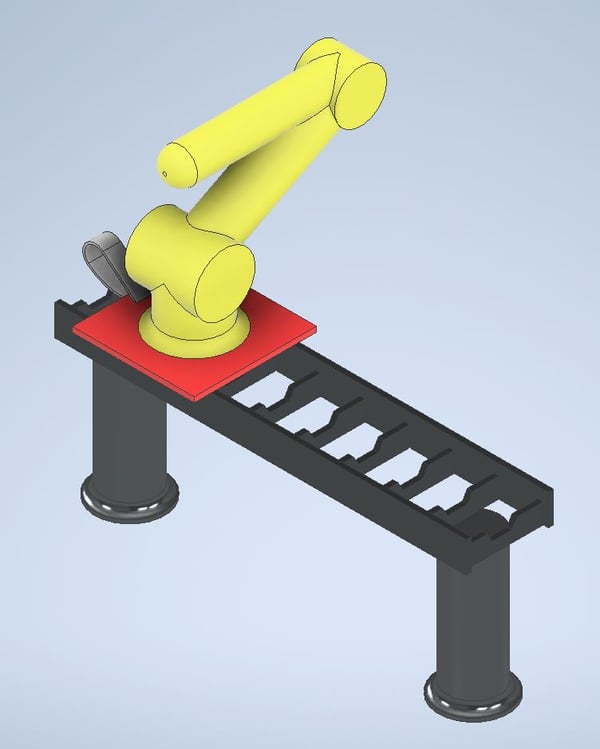 What are the different types of Gantry Robots?

Gantry robots being a subsidiary of cartesian robots are often used and designed in similar methods. The types of Gantry Robots don’t change drastically as they are designed for certain tasks. Each task dictates the specifications of the Robot. Generally, a Gantry Robot is an overhead system that works from above downward. This allows it to make full use of the workspace at hand as well as using the entire workspace except for where its supports are. The drawback to this is anything blocking its path impedes on its work and performance. These overhead systems are typically large and are intended for high load activities.

A gantry system does not need to be set up overhead. There are plenty of smaller systems that are designed for on desk operations. An example of this is production for computer chips and small components. You may want the freedom of a 3 degrees of motion but not need the size a typical gantry system is reasoned to be. The design, being specific to the task, allows for production of smaller, systems with greater accuracy to produce smaller products.

Designing a Gantry Robot has its own considerations, although it is often simpler than its primary competitor the SCARA system. Although the SCARA system has an extra region of rotation, its uses can be limited in the load it can withstand with a cantilever arm Some users may also have difficulty programming of it. Gantry Robots being axis-centric allows for easy programmability.

The considerations with Gantry Robots come in through the designing of the system for the task, figuring out the best way to lay the system in the given space to optimize its usability and production. This initial difficulty is offset by the benefits of having excellent load bearing capabilities, reach, and repeatability. The level of customization through this step allows for no need to go unmet.

Position accuracy is a huge point of purpose for the system. Specifically, it is the robot’s ability to place the part correctly, and then repeat the process over and again. Since this is working in an X,Y,Z system the only limitation is the way in which the robot is designed. The accuracy is increased and maintained by not running motors on both of it’s X axes, but by having a setup similar to that in a car. The differential in a car allows for axial motion to be passed to two wheels and become rotational, through one source drive train. This being similar to Gantry’s in that they will have one motor that provides power to the two X axes allowing them to remain in sync and compatible during the repeating process.